If you’re considering owning a drone, then you need to consider one that is masterfully designed, yet easy to use. Probably the only drone that has twin computers for a brain, it is packed with revolutionary, never-before seen technology that more than justifies its price tag. With simplistic controls that even a beginner can master and enhanced features like Smart Shot, the 3DR Solo provides a dynamic, entertaining experience for those new and old to to the world of drones. Let’s take a closer look at this device to see how it measures up and see if it’s the right fit for you.

The 3DR quadcopter has several unique features that sets it apart from its counterparts and it all starts with the use of two 1 GHz computers to operate it. This technology lets it act independently and combines with high-grade hardware and software to deliver industry-leading firsts in form and function. It’s closest rival, the Phantom 3, has yet to incorporate such innovations.

With a lightweight and durable housing, the Solo feels comfortable yet substantial in your hands and can climb to height of 400 ft. or more (400 ft. is the FAA ceiling).

To start, it is equipped with smart controller that has push-button technology- so anyone can operate it. Set up to operate like a game pad, you can easily make it start, stop or change directions. The controller also works with an iPad mini, giving you a large display area. The Solo also has a fully integrated Apple and Android application to make flying smooth and seamless. Finally, it has built-in safety features, including a button that will make it “return home” if you lose sight or control of it.

In addition, the Solo gives you decent battery life: the 5200mAh battery lasts for up to 25 minutes and has a fixed frame and HDMI cable for a great live view without needing the gimbal. However, if you choose to purchase the separate gimbal to use with the GoPro it unlocks wireless features and improves camera stability for improved footage.

Among the features you can only get with the Solo are GoPro access while flying wireless HD video streaming and Smart Shot technologies. Using the Solo gimbal you can gain in-flight access to your GoPro to pause, change camera angles, adjust the resolution and more. It is also the only drone that lets you stream HD video directly to your Apple or Android devices. No waiting to transfer via a USB cord: wirelessly transmit the footage for instant viewing.

Finally, there is Smart Shot technology: just choose the shot you want and let the Solo do the rest with these four modes:

Now that you have a complete overview of what the Solo can do, lets weight the pros and cons of the drone.

There are a lot of incredible features and specifications that stack the deck in the Solo’s favor. To begin, it has ground-breaking computerized technology that gives it an intelligence to make flying easy and fun. Instead of worrying about how to maneuver it or unlocking its potential just push the button and go. It is big on quality, with features like follow and orbit that cannot be found on the most popular drones, even the wildly popular Phantom 3. Finally, it lets you capture aerial shots other drones simply cannot even come close to, giving you angles and a depth that currently can’t be touched.

The downside to the Solo is two-fold: it’s price and the absence of the gimbal. While it is more than worth the price, it is considerably higher than other drones, including the Phantom 3. Yes, it has a lot more to offer, but the Phantom is a solid alternative that some consumers may choose if it comes down to price. Especially when you factor in that you have to purchase the gimbal separately; the Phantom 3 comes with the gimbal.

Overall, the 3DR Solo Drone Quadcopter is a portrait of everything a drone should be. Paving the way for future drones with its state-of-the art technology and ability to capture stunning images you won’t find anywhere else. While it comes with a steep price tag, it is worth it as it is an investment that will only grow in value over time. With a controller that makes flying almost instinctual, this drone is a must for anyone who wants to experience the pinnacle of flight and cinematography. 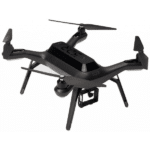