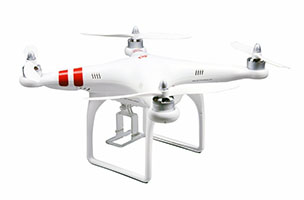 The DJI Phantom Aerial UAV Drone Quadcopter for GoPro is DJI’s 2013 entry into the ever-expanding personal drone market. This edition of the Phantom line is what DJI calls “ready to fly.” What this means is that it has been tuned and set up to pretty much fly right out of the box for you.

Let’s get to the point here – if you’re a GoPro user this is the drone you want. The camera rig on the DJI Phantom Aerial UAV Drone Quadcoper for GoPro ingeniously allows you to use any version of the GoPro.

It’s important to note that you’re not limited to the GoPro line of cameras. You can attach any lightweight camera as long as it will fit in the right. The video below was shot using a Keychain Camera.

You can compare that to this video, which was shot with the GoPro Hero:

Furthermore, if you’re looking for a quadcopter in the mid range that will allow you to experiment with using a camera or just flying it for fun, this quadcopter will not disappoint. It outperforms most entry-level drones while still delivering the ease of use you want from a “ready to fly” quadcopter.

Overall, this is a great value.

The Phantom Aerial bears DJI’s trademark look – “X” layout of the 4 rotors, white exterior with red trim and the undercarriage camera rig. You can’t help but see a bit of the Star Wars X-Wing fighter in DJI’s industrial design.

As with other DJI quadcopters the exterior is quite rugged and resilient. This is also due in part to the structural choice to use an X-like layout – the whole design works together to remain lightweight and sturdy.

The camera rig is simple and easy to fit to any existing GoPro Hero camera. You can mount your camera in the standard forward facing position or point the camera straight down. Choosing your camera position is a snap.

Overall, the camera rig is sturdy and holds the GoPro firmly. You won’t have to worry about the camera coming loose in-flight, which is reassuring to say the least.

After installing the battery and attaching the rotors you’re ready to go. The Phantom Aerial will automatically run through configuration and tuning for you as part of its start up sequence. Therefore, within a few minutes you’re ready to fly.

In the air, the Phantom Aerial is as nimble and fun to fly as you would expect from a DJI quadcopter. When flying in GPS mode the quadcopter will hover whenever you release the controls. This is a great feature when filming events like sports games or performances. This also gives new flyers a bit of reassurance by allowing the flight path to be easily corrected.

This video shows the Phantom hovering while in GPS mode:

Attitude Mode is essentially a manual mode. What this means is that you are in full control of the quadcopter. There is no fixed position for it to try to maintain and when you release the controls the Phantom will drift in the direction it was last flying. Obviously, this is for more advanced flyers.

Return to Home is basically a failsafe for the quadcopter. After setting your home point, if the Phantom flies out of range it will quite simply return to home. This also applies if contact is lost with the transmitter for any reason, such as loss of battery power or radio interference.

The Naza-M software allows you unlock more advanced flying modes and features. These include manual control over maneuverability, Intelligent Orientation Control and greater control over the transmitter. We’d recommend waiting until you’re pretty confident flying in Attitude Mode before you dig into the Naza-M flight controls.

It’s worth pointing out that access to the Naza-M software is what makes the Phantom Aerial so rewarding to fly. As you become a more advanced and confident flyer you will be able to do more and more with the Phantom, meaning you won’t feel like you’ve outgrown it.

One in-flight feature we were not so fond of is the inability to stream video over Wi-Fi. This is due to the fact that the GoPro Hero and the Phantom broadcast on the same frequency. Therefore, the signal from the camera will essentially terminate the connection between the Phantom and the controller.

While there certainly are more advanced and featured filled quadcopters available, if you’re looking for a quadcopter that is ready to go right out of the box but will keep on delivering then this is the right one for you.

Also, if you’re a GoPro Hero user then again, this is the right choice.  You might also be interested in this if you don’t want to get pinned down with one type of camera for your drone.

Entry-level users should also consider this quadcopter due to its simple flying modes, like GPS, that will take some of the intimidation out of learning to fly.

Overall, the DJI Phantom Aerial UAV Drone Quadcopter for GoPro is an incredible value that deserves your attention. 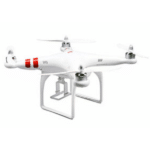