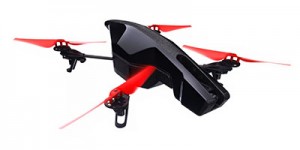 The Parrot AR Drone 2.0 Power Edition Quadcopter is the latest version of AR’s popular series of personal drones. The Power Edition introduces a new black color scheme with a variety of colored rotors and more importantly, a huge improvement in battery life – up to 36 minutes! This is achieved through the use of 2 batteries, something that previously could only be done with your modifications.

In addition to the massive battery life, this quadcopter is also powered via the smartphone app; there is no controller. This is quite different from other quadcopters, such as the popular DJI Phantom FC40, which use a controller in conjunction with a smartphone. What this means for you is that you would have one less piece to tune and calibrate before taking off.

The Power Edition of the Parrot has been redesigned with a much more stealthly and sleek look – all black. The only color on the quadcopter comes from the rotors, which AR furnishes in orange, red, blue, or – you guessed it – black. So, if you’re a fan of the Sith or the Darkside, the choice is easy for you.

However, the real appeal of the Parrot is it’s ability to pull off some extremely tight maneuvers, such as cornering and barrel rolls. If you’re looking for a speedy quadcopter that is a whole lot of fun to fly, this is the quadcopter you’ve been looking for. Just check out this video:

While not the most aesthetically pleasing quadcopter on the market, the redesigned Parrot has some nice updates. Firstly, there are two bodies. There is an outdoor body, which is sleek and streamlined, allowing for some very cool maneuvers. Or, you can choose the “indoor” body, which provides circular rotor guards as well as foam like padding for the body.

The new Parrot also includes two batteries, which theoretically doubles your flight time. However, you will have to land and swap batteries; the 36 minutes of flight time is not continuous unless you modify the quadcopter to carry both batteries.

Despite its flimsy looking appearance, the Parrot is designed to fly and that it does very well. The Parrot is extremely aerodynamic, which when combined with it’s lightweight design makes for some very fun flying.

The Parrot is controlled via it’s smartphone app, which is an interesting approach. This eliminates a lot of the headaches of calibration and tuning users experience with a traditional RC controller. All you really need to do is turn on the drone, fire up and the app and you’re ready to fly.

The app functions much like flying games and is quick and easy to learn. You can use the onscreen controls or your phone’s accelerometer to control the drone. The app can sometimes be glitchy and freeze, however it doesn’t seem to crash. The Wi-Fi connection between the drone and your phone is strong and does not drop out, which is a plus.

Once in the air, the Parrot is a pleasure to fly. We found it’s movements to be very precise and easy to maneuver, which at first is unexpected given it is being controlled from a touch screen.

Flying indoors we were able to successfully navigate through an office – straight down hallways, around corners and through doorways. Never once did we feel the Parrot was drifting or out of control.

Flying outdoors is where the Parrot really shines. Here we were able to take advantage of the drone’s speed and agility. Again, when it does work, the app performed surprisingly well when controlling the drone; it’s clear AR is really onto something with this.

The really amazing feature of the Parrot is the barrel roll. A double tap on the touchscreen and the drone performs this super cool move. Check out the video below to see what we’re talking about:

There are a few negatives here. Firstly, as we’ve already mentioned, the app can be glitchy. We noticed this most when doing barrel rolls, which really is a shame as it’s the coolest thing about the Parrot. About 50% of the time the Parrot just didn’t roll when we double tapped the screen. To be fair, it could be the phone or it could be the app or it could be the way the app was running on the phone. Controlling a drone via a smartphone is a very new thing and undoubtedly there will be updates and improvements. We did find that there are more apps becoming available via sites like drone-apps.com. But, for now, expect a few things to go wrong.

Overall, we found the Parrot to be really fun and entertaining to fly, more so than other quadcopters. Clearly, this is a different kind of flying experience, one that’s geared more towards the RC crowd.

The camera is a great addition for the Parrot and provides great footage. This is especially true when navigating indoors; we really had a lot of fun flying around the office and can see how this could make for some really entertaining video.

Outdoors the camera proved to be slightly disappointing. The lens is rather narrow which made for scenes to be tight rather than wide and panoramic. This is an odd choice since the market for outdoor quadcopter video has really grown and still has high demand.

If you’re looking for drone that is fun and easy to fly for a reasonable price, the Parrot AR Drone 2.0 Power Edition Quadcopter is a great choice. The Parrot is easy to learn and fun to fly. While the video and overall experience is not as high quality as other quadcopters, for the money we think you are getting what you pay for.

However, if you’re looking for something a bit more serious or if you’re more interested in a quadcopter with the best video you should consider something in the DJI Phantom line. 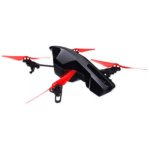