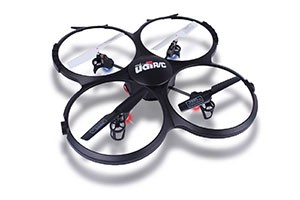 The UDI U818A Gyro Quadcopter with Camera is the big brother to UDI’s Micro-UFO. This quadcopter comes with and onboard camera and is controlled via UDI’s excellent 2.4 Ghz transmitter.

Featuring a similar 4-ring design to the AR Parrot, UDI has included what they call a “six axis gyro system.” This system consists of 3 gyros and 3 accelerometers, which work together to stabilize the quadcopter during flight and also add agility.

UDI has also added an onboard camera, which is an excellent upgrade. This also shows that UDI is serious about competing with others for the title of best quadcopter with camera. However, the big question is – how much quadcopter can you really get for the price?

Simply put, this is a really fun quadcopter to fly for not a lot of money. For less than a hundred bucks you get a quadcopter with a camera and a separate controller that does some pretty cool in-flight tricks. Like the Parrot, you can do barrel rolls, but because you’ve got a controller and not just an app, you gain a level of manual control akin to other quadcopters like the DJI Phantom series.

Overall, while you’re missing many positives offered in other quadcopters, like GPS or the ability to mount a GoPro, you still get all the essentials. Because of it’s low sticker price we could easily see this as a starter drone for young adults, or even a small fleet used for PR events.

The 4-ring design ingeniously protects the rotors, and while this doesn’t make it crash proof it certainly does help eliminate damage to the most vital parts. Unlike other quadcopters that use the design, the rings are not so delicate and give the drone an overall firm feeling.

We found that overall the U818A quadcopter was well built and able to hold up well to the usual landing, take off and flying conditions. The 4-ring design does take some getting used to, especially in windy conditions, more so than other designs that seem to utilize a lower center of gravity to better deal with wind and turbulence.

Flying is where the U818A really excels. UDI has included two flight modes which are accessed via the controller. You can think of them as high performance and standard. Once you’ve gotten the hang of maneuvering you can switch into high performance mode and really have some fun.

In high performance mode you are able to fly the quadcopter at higher speeds and also perform loops and barrel rolls. Unlike the AR Parrot, you’re not limited to single rolls because the U818A uses a controller. With a little practice you can be performing double and triple rolls and having a lot of fun.

This video gives you a good idea of how much fun this quadcopter is to fly:

The U818A’s camera is accessed via controller. With the push of a button you can take still photographs or record video. The quality of the video is surprisingly good for this price point and rivals many other quadcopters with cameras. Once you get the hang of doing rolls and other tricky moves recording them on camera adds to the fun.

Despite it being so easy to use, there are a few negatives with the camera. Firstly, you cannot see what you are shooting. Therefore, you will have to learn to assess the angle of the camera through trial and error.

Also, the lens is quite narrow. If you are looking for the kind of breath taking landscape shots and panoramic videos you are seeing on YouTube and on sites like dronestagram you will be disappointed. The U818A’s camera seems to be best suited for capturing the quadcopters high speed maneuvers in first person video.

Like other quadcopters with camera, the U818A records photos and video onto a Micro-SD card. We found the video didn’t need any touching up or enhancing, it was clear and crisp. Of course, the quality of video does rely on lighting and weather conditions.

The flight range was another disappointment. Compared to other quadcopters, like the DJI Phantom 2, the U818A’s range of 300 feet left us wanting more.

Likewise, the lack of GPS and return to home features again, left us wanting more. However, for the money it is hard to expect a quadcopter that is fully loaded with features.

If you’re looking to get into the personal drone or quadcopter game without spending much cash then this is a good bet. Despite its shortcomings, it’s hard to overlook the price of the UDI U818A 2.4GHz 4 CH 6 Axis Gyro RC Quadcopter with Camera RTF Mode 2.

At such a low price point it’s possible to look at this quadcopter a few different ways. For example, this could be a good introductory quadcopter for a teenager or young adult.

This could also take your vacation to the next level with some super cool video on the beach or wherever you take the family.

If you’re a small business owner you might consider buying three or four of these quadcopters and using them for PR purposes at events.

This could also make a great addition for any sports team. Just imagine getting video of the homecoming kick off this fall or the opening pitch of a little league baseball game.

Again, because the price is so low and because it has a camera the sky is the limit to the number of applications for this quadcopter. 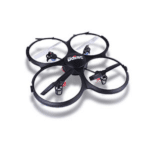